Table 1 below indicates the current and revised PSC. For avoidance of doubt, the rates below are inclusive of the Passenger Security Service Charge:

The Commission takes note that Malaysia Airports Holdings Berhad (“MAHB”) does not charge PSC at STOLports in Sabah and Sarawak for flights under the Rural Air Services which facilitates air connectivity of rural areas in East Malaysia.

The PSC, an aeronautical charge as published in the Gazette under the Malaysian Aviation Commission (Aviation Services Charges) Regulations 2016, is levied on departing domestic and international passengers at all national airports. The PSC is collected by the airlines upon purchase of tickets and is paid to the airport operator following completion of the flight. Passengers who do not travel on a flight for which they have purchased their tickets are eligible for a full refund of the PSC. Prior to the establishment of MAVCOM, the PSC rates were enlisted under the Malaysia Civil Aviation Regulations 1996. The last PSC revision was on 15 November 2011.

At RM35, this new tier will mean cheaper ASEAN travels. The new tier for ASEAN is set in between the revised PSC rate of RM11 for domestic flights and RM73 and RM50 for international flights out of all airports and klia2 respectively.

Malaysia is the first country in ASEAN to introduce an ASEAN PSC tier and it is anticipated that this will further boost traffic to and from ASEAN nations.

Enhancing intra-regional connectivity within ASEAN and its sub-regional grouping will benefit all ASEAN nations through enhanced trade, investment, tourism and development.

The introduction of the ASEAN PSC tier may also increase the possibility of opening secondary gateways in ASEAN and consequently increasing traffic inflows into points in Malaysia.

It is also in line with the ASEAN Single Aviation Market (ASEAN-SAM) or also known as the ASEAN Open Sky Agreement/Policy, the region’s major aviation policy. ASEAN-SAM is geared towards the development of a unified and single aviation market among ASEAN members in Southeast Asia.

(2) Gradual move towards equalisation of PSC at KLIA and klia2

Since its commencement of operations in May 2014, klia2’s PSC rates have been lower than all other airports in Malaysia as it adopted the PSC rates of KLIA’s LCCT, which has since then ceased operations as a passenger airport terminal due to insufficient capacity. Given that the services, facilities and infrastructure at klia2 is more comparable to that at KLIA than the LCCT, the Commission is of the view that a continuation of lower PSC rates at klia2 could provide an unfair pricing advantage for carriers operating out of klia2. In addition, continuation of differentiated PSC rates at the two terminals gives rise to a risk that passengers in KLIA will subsidise passengers in klia2. Therefore, it is appropriate to equalise PSC rates between the two terminals.

MAVCOM, which subscribes to the principle of a level playing field, is therefore taking steps to fully equalise the PSC at KLIA and klia2, albeit on a gradual basis. Pursuant to these steps, MAVCOM shall:

MAVCOM is also of the view that in the long term, equalised PSC rates will facilitate an environment of fairer competition between airlines operating at these two terminals. Equalisation of PSC rates at KLIA and klia2 also enables Malaysia to be better aligned to international guidelines, including with the International Civil Aviation Organisation (“ICAO”) principle of non-discriminatory pricing at airports.

(3) Malaysia’s PSC still amongst the lowest regionally and globally

In formulating the PSC rates for airports in Malaysia, MAVCOM also took into consideration the existing PSC rates in other airports around the region and globally. After the revised structure, MAVCOM takes note that passenger airport charges in Malaysia remain amongst the lowest regionally and globally. 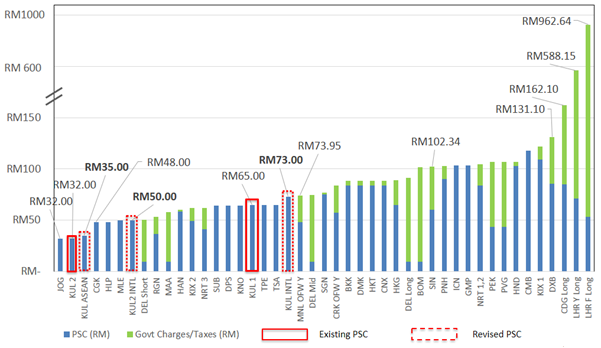 Table 3 shows a comparison between Malaysia’s current PSC, revised PSC and PSC rates and additional governmental charges at other airports in Asia and the Middle East, for domestic flights. The Commission notes that the newly revised PSC for domestic travel in Malaysia is the lowest in Asia, except for Hanoi and Ho Chi Minh City. 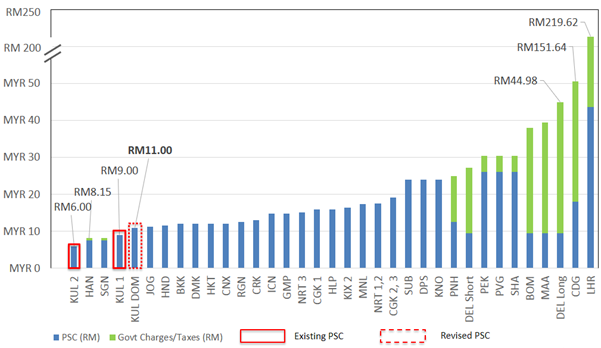 In addition to the revised PSC rates, the Commission will introduce measures to ensure airport operators remain committed and accountable for improving airport service levels and financial efficiency, for the benefit of air travellers in Malaysia. Pursuant to this objective, MAVCOM is currently developing a framework that links aeronautical revenues to customers’ and stakeholders’ satisfaction levels. The framework will be introduced in 2017.

The Commission, whose objective includes to facilitate the continued economic development of Malaysia’s aviation industry – including both airlines and airports – is cognisant that income generated by airport operators in Malaysia via the PSC will serve towards the operation, maintenance and development of the nation’s airports – ultimately for the benefit of air traveller welfare in Malaysia.

With this background in mind, MAVCOM has conducted a thorough review of the PSC and brought Malaysia closer towards applying good international practices for airport charges regulation, whilst concurrently ensuring Malaysia’s PSC rates remain amongst the lowest in the region. In addition to that, the Commission had also met and engaged with relevant stakeholders throughout the review period.

“Since our inception in March 2016, we have started to make inroads into the transformation of the civil aviation industry in Malaysia. The Commission has, amongst others, introduced the Malaysian Aviation Consumer Protection Code 2016 (MACPC) and implemented a more stringent commercial licensing application process for airlines in Malaysia.

“We are very focused on a long term and sustainable outcome. Our work on the PSC review aims to safeguard consumer interests, promote fair competition and ensure the airport operators continue to enhance their service levels. At the same time, the Commission will continue to strive for consumer protection through the MACPC,” said Y. Bhg. Gen. Tan Sri Dato’ Sri Abdullah Ahmad RMAF (R), Executive Chairman of MAVCOM.