MAVCOM is optimistic for continued positive industry performance in 2018


KUALA LUMPUR, 28 MAY 2018 – The Malaysian Aviation Commission (MAVCOM) released its first biannual Industry Report, Waypoint, for 2018 as part of its overall commitment to foster a deeper understanding of the aviation industry in Malaysia.

Core areas featured within Waypoint include the Commission’s outlook on the industry, a macro overview of the sector, an analysis on industry structure and performance, as well as a review of the ground handling services segment in Malaysia.

YBhg. Gen. Tan Sri Dato’ Sri Abdullah Ahmad, RMAF, (Retd), Executive Chairman of MAVCOM, said, “We are pleased to release this edition of the Waypoint Industry Report, in line with our focus of further developing Malaysia’s aviation industry. As the economic regulator for the sector, we believe it is part of our mandate to equip industry players, investors, related agencies, members of the public and other stakeholders with regular insights into the state of the sector in Malaysia. It is also our hope that this report will provide an avenue for relevant stakeholders to obtain a clearer picture of where opportunities may lie within the sector.”

Key Highlights from the Waypoint Report 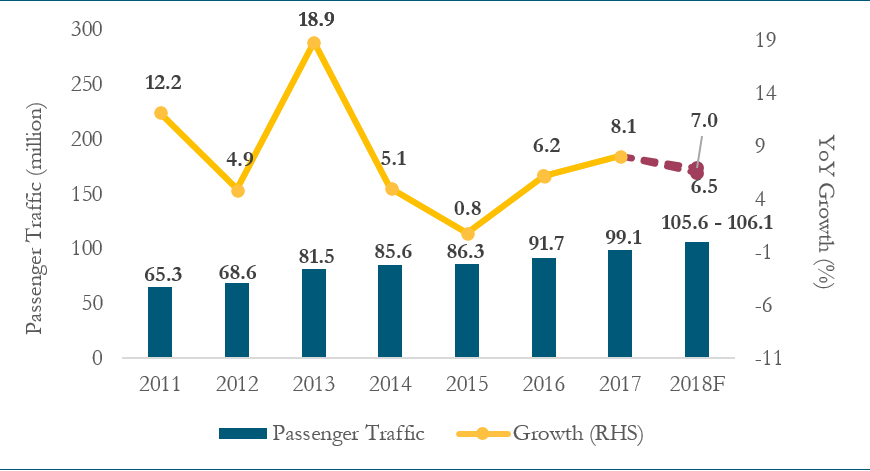 
Abdullah added, “On the whole, the Malaysian aviation industry appears well-positioned for growth, despite the challenges to be had given narrowing margins and rising oil prices. The last two years have been strong from an industry standpoint, as shown by passenger traffic growth, industry operating profitability and the market capitalisation of public-listed aviation companies during this timescale, especially in comparison to the immediate period before. Challenges remain, but MAVCOM is optimistic that the positive industry performance of recent years will continue in 2018.”

In addition to the Waypoint report, the Commission had also released an accompanying technical paper on air connectivity which serves to outline MAVCOM’s research and analysis of Malaysia’s air connectivity vis-à-vis the ASEAN region. This is particularly important, given that air connectivity plays a crucial role in linking the civil aviation industry with tourism and trade. Globally, 54.0 per cent of international tourists travel by air and 35.0 per cent of world trade (in terms of value) is carried by air.

The technical paper also concluded that in terms of point-to-point passengers, Malaysia was the fourth most connected country in ASEAN after Thailand, Singapore and Indonesia. This is because Indonesia, Singapore, and Thailand have higher connections to airports with a higher share of international traffic, both within and beyond Asia Pacific. Also, Singapore and Thailand are connected to more destinations and have more seats to those destinations versus Malaysia.

The Waypoint Report is available as a PDF here.

The accompanying Technical Paper on Defining and Measuring Air Connectivity can be downloaded here.

Waypoint Reports and accompanying technical papers are released on a bi-annual basis and more information can be found on MAVCOM’s website at www.mavcom.my