In 2007, the Malaysian Cabinet decided for the RAS operation to be returned to MAS or its subsidiary. MAS then established MASwings to be the entity running RAS and in June 2007, it was decided that MASwings shall take over the RAS operation for ten years.

The cost for the operation of RAS by MASwings is fully borne by the Malaysian Government in the form of subsidies and aircraft lease payments. The first flight was on 1 October 2007, which is also the anniversary of the founding of Malaysia Airlines in 1972.

Under the new public service obligation (PSO) agreement inked with the Government in January 2019, MASwings operates 40 rural air services (RAS) routes in Sabah and Sarawak (including cargo services from Miri) from 2019 until 2024.The Ministry of Transport (MoT) has also designated one additional route to be added to the RAS network effective from on 1 May 2019. As such, there are now 41 RAS routes with 13 routes that are being serviced by ATR 72-500 aircraft and 28 routes are being serviced by the Twin Otter Viking DHC6-400 aircraft. These routes in turn operate in 10 airports and 13 STOLports within Sabah and Sarawak.

The routes for both the ATRs and Twin Otters are as below: 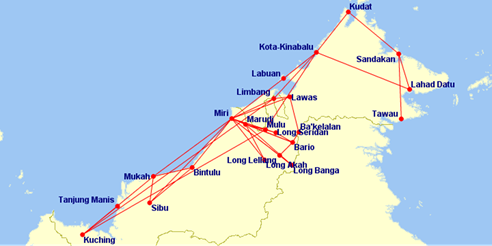 The routes for both the ATRs and Twin Otters are as below: 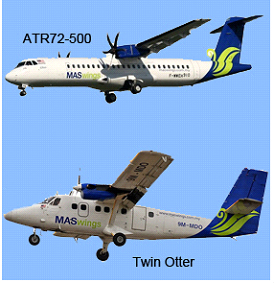