East Malaysia (consisting of the Malaysian states of Sabah, Sarawak, and the Federal Territory of Labuan) is part of Malaysia located on the island of Borneo. Borneo is the third largest island in the world and is separated from West Malaysia by the South China Sea. Spanning the equator and dominated by lush rainforest, Borneo has some of the oldest and most bio-diverse rainforests, lengthy shorelines and a wealth of natural wonders. Compared to West Malaysia, East Malaysia is less populated and less industrialised, but its land mass is larger, and it has more natural resources – primarily timber, oil and gas. The state of Sarawak stretches some 800 km along the northwest coast of Borneo and directly adjoins the state of Sabah to the north-east. Sarawak offers a mix of historic, cultural and natural attractions while Sabah lures visitors to its rich wildlife, national parks, scenic islands and beaches. 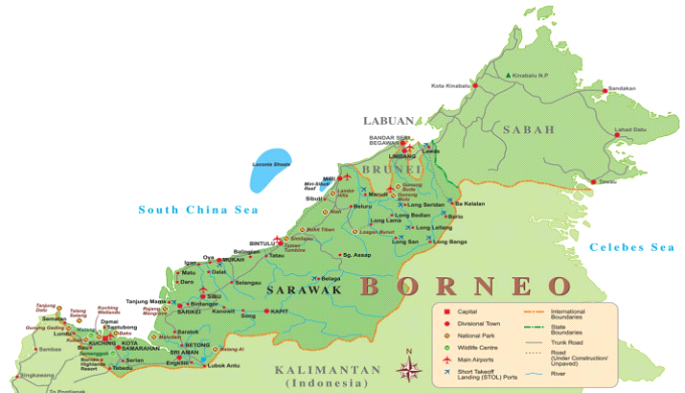 Sarawak and Sabah are the largest and second largest states in Malaysia at 124,450 sq. km. and 73,620 sq. km. respectively compared to Peninsular Malaysia’s total 130,590 sq. km. (which contains 40 per cent of Malaysia’s total land area). In terms of total land area, Sarawak is approximately 90 per cent the size of Peninsular Malaysia. The two states are also the second and fourth most populous states in Malaysia, with 3.80 million in Sabah and 2.74 million in Sarawak, compared to the nation’s total population of 31.60 million as of 2016 (based on the Malaysian Department of Statistics). In Sarawak, there are 0.04 persons per sq. km. while in Sabah, the population per sq. km. is 0.01 versus 95.70 persons per sq. km. in Peninsular Malaysia. The population of East Malaysia is widely spread out, with 46 per cent of the population in Sarawak and Sabah living in rural areas as opposed to the national average of 29 per cent; and 20 per cent within Peninsular Malaysia. The low population density of these two states also correlates with their respective levels of urbanisation.

Why Air Transport is Essential in Sarawak and Sabah

The rough terrain of Sarawak and Sabah as well as the vastness of the states limit the extent of land transport accessibility to the interiors. The landscape of these two states range from swamplands around the coast, riverine plains and extensive mountain ranges covered in dense rainforest. These geographical characteristics hinder road connectivity between Sarawak’s central areas to the interiors and Sabah’s central and western regions 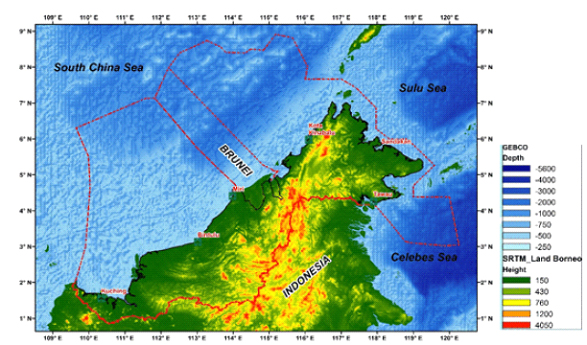 In Sarawak, the road network is relatively under-developed, and the existing road infrastructure concentrates mostly in connecting the cities along the coast. As Sarawak is almost 70 per cent bigger than Sabah, the road connectivity within Sarawak is much lower than that of Sabah. Fifty per cent of the roads in Sabah and 30 per cent in Sarawak are gravel or earth roads. 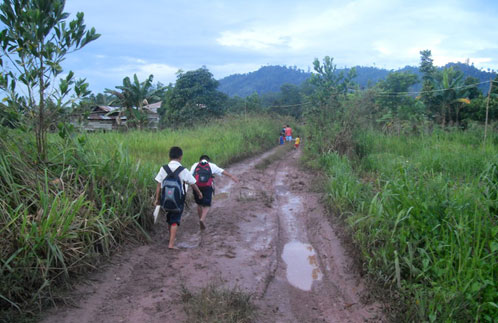 At present, the Pan-Borneo highway project is being carried out in the two states to enhance the existing coastal road infrastructure which is currently known as the Trans-Borneo highway. This is the main road system connecting Sabah, Sarawak, and Brunei. The Pan-Borneo project entails the upgrading of roads from a two-lane single carriageway to a four-lane dual carriageway, modern bridges, rest and service areas, designated lay-bys, and interchanges. 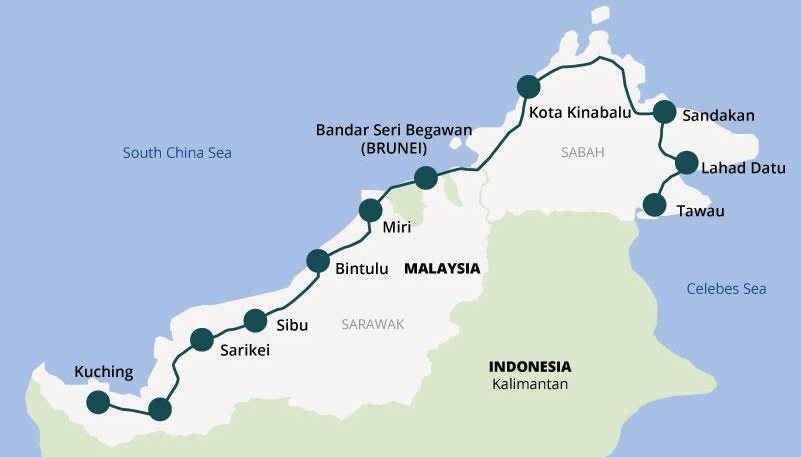 Sarawak is characterised by an extensive network of navigable rivers that form an inland waterway transport system. The state has 35 gazetted rivers (under the Sarawak Rivers Ordinance 93) rivers with a collective length of about 5,000 km, of which approximately 3,300 km are navigable. The Sungai Rajang (567 km in length), is not only most important river in Sarawak, but also the longest river in Malaysia. The other major navigable rivers include the Batang Baram, Batang Kemena, Batang Tatau, Sungai Limbang, Batang Lupar, Batang Sadong, and Sungai Sarawak. 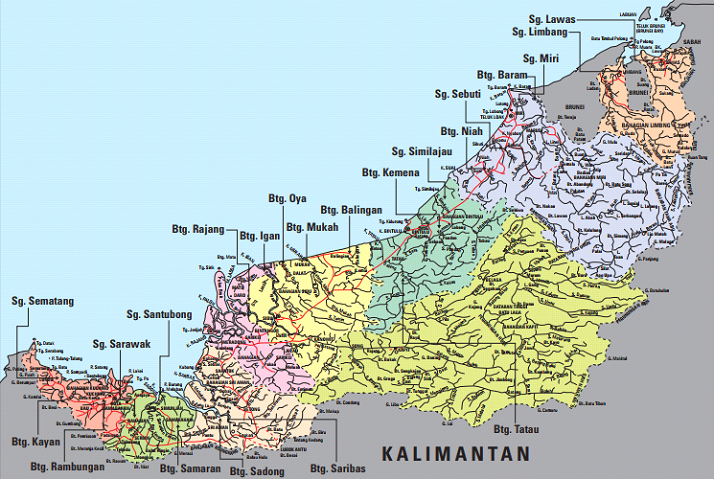 For Sarawak, these navigable rivers form the backbone of the state’s riverine transport system and has great importance to a large section of Sarawak’s population who live in the interior and along the coast. Although coastal shipping is not part of Sarawak’s inland waterway transport system, it provides an important link between rivers and settlements in the overall system. As a large segment of the population live in the interior and along the coast, the inland waterway transport system of Sarawak plays a significant role as the primary means of transportation – performing functions that, in the states of West Malaysia, are undertaken mainly by road and rail. The rivers also provide efficient passage for resources such as timber and other agricultural goods to reach international deep-water ports for export. 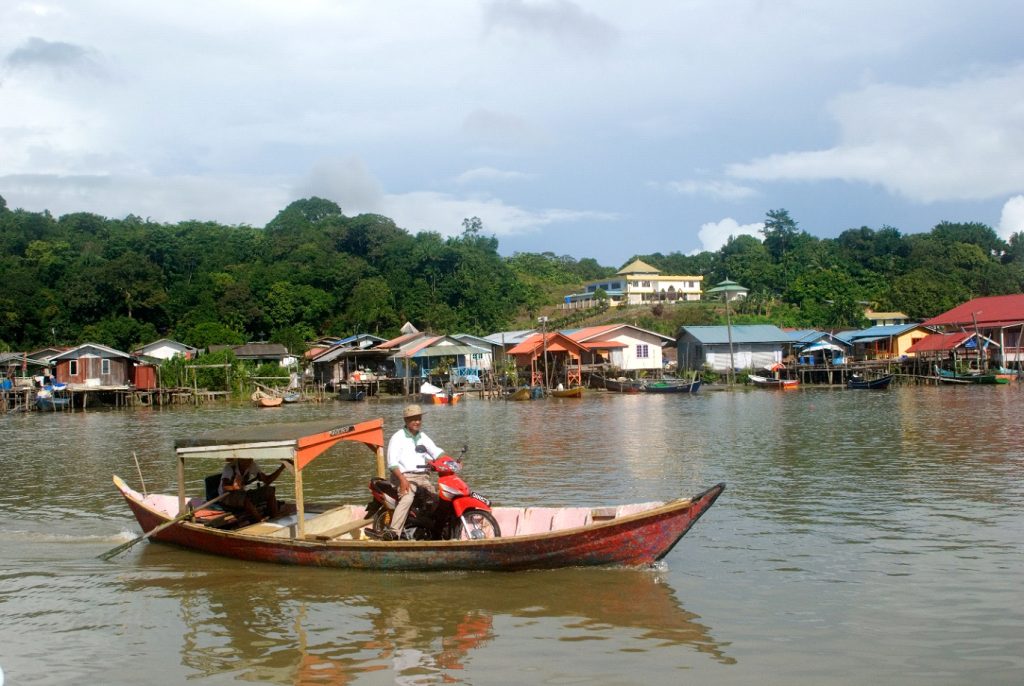 A man and his motorcycle on a boat crossing a river in Bako. Kampung Bako is a small fishing community. 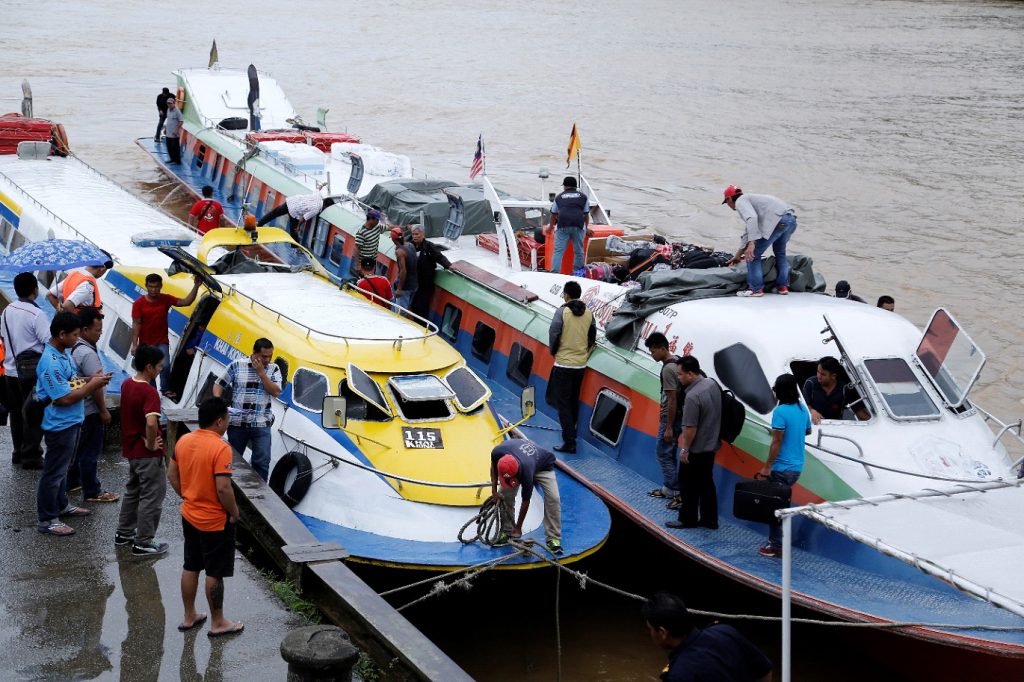 This riverine transport system connects rural communities to the state’s larger towns and cities; reduces isolation, and provides employment opportunities. In addition, the promotion of community-based ecotourism along rivers not only provides extra revenue for Sarawak but creates income opportunities for poor communities and helps raise awareness of the need for sustainable river management. For Sarawak and Sabah, air transport is therefore relatively important, if not essential, particularly where the communication system is still being developed and roads are poor or non-existent in some areas. With 64 per cent of Sarawak’s total land area covered with primary and secondary forests, and with rugged terrain, air transportation is the only means of connecting remote, sparsely populated, or otherwise inaccessible parts of Malaysia with the rest of the country.